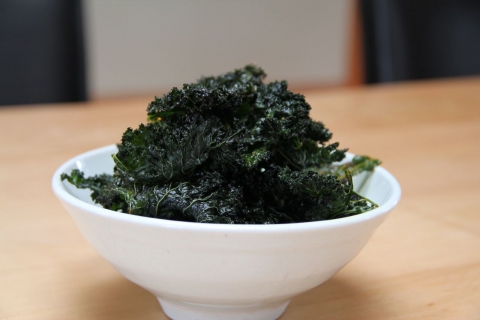 In the world of dehydrators, there might be nothing as "modern" as dehydrated kale chips. Before 2010, the idea was basically unheard of, but now you run into kale chip recipes everywhere online. Part of this popularity we think comes from more interest in healthy food generally. Kale, high in beta carotene, vitamin C, vitamin K, and rich in calcium, definitely qualifies as a healthy food.  But dehydrators add another key feature that we think makes kale chips even more popular – the ability to run at the low temperatures needed to make “raw” food.

We recently decided to try some different kale chips recipes to see what the big fuss is all about. Can kale, a relative to cabbage and broccoli, actually be made into a snack that people (and kids?) will eat voluntarily? We’re happy to report that you can make a pretty good snack out of kale. Our kids wouldn’t go out of their way to eat more kale chips, but they did give some of these recipes a solid “not terrible”.

This is a tasty kale chips recipe that makes good use of tomatoes you have previously dehydrated. The resulting kale chips have a nice tomato tang, with the satisfying nutty crunch of cashews. One of our favorite kale chips recipes.

This one of the more flavorful kale chip recipes we've tried. Our kids even "sort of" like it. The miso and nutritional yeast give the kale a special tang that will remind you of parmesan cheese. Make sure you take care that the kale is coated evenly – it’s easy to end up with too much seasoning.

An interesting kale chips recipe that is sweet instead of salty. The mild taste of cinnamon and sugar remind us of something that might be served around the holidays.  This recipe contains no oil, so the kale chips become very crisp and have a paler color.

Kale Chips with garlic and cashews

A basic kale chips recipe that will satisfy your craving for a salty, healthy snack. Quick and easy to make.

This is a good basic kale chips recipe. The taste is subtle but satisfying.

This is useless!! No links to the recipes??

Try clicking on the titles. I was able to access recipes by doing that.

The title of the recipe is the the link

Kent- Thanks for pointing that out. We forgot to add the links! All the Titles are now links.

I just tried these while visiting a friend. My son and I loved them. He is an aspiring snow boarded and this is an awesome snack for him!!

I love these recipes, but since kale can be purchased in various forms and amounts, these great ideas are totally useless since I have no idea what amount of kale to use for each. (Unless I'm missing that this info is on this website somewhere, but then not in an obvious place??)

Anita - thanks, that's a great point! I need to add something about Kale quantity to the recipes. In each case, I used either one large bunch of kale, or two small bunches. In the end, your personal preference for seasoning is the best guide (like salad dressing).

I grow kale in my garden and pick the outer leaves from many plants, letting the younger leaves continue to grow. I estimated I picked 2 large bunches, but how can I know? It would be a big help if you would give an approximate weight (either before or after removing stems, but please specify!).

Love this - thanks so much!

Why are people so harsh? The information on this page is not useless. Can't people just ask nicely for help, like some others exemplify? Let's practice being kind. Kale won't help your health if your attitude stinks. Thanks for the seasoning ideas.

Thank you. Can't believe the preponderance of negative comments.

I agree loopy!! There are some rude people about!

Thank you for all the great ideas! I am surprised at the people saying this information is useless. It is great! I appreciate you sharing some ideas to get me started dehydrating kale!

I'm excited to try the Asian Kale Chips!! I've made kale chips in the oven, then just remember "I HAVE A DEHYDRATOR" that I never use. Hahaha!! Cat's recipe sounds yummy too! Thanks for making these recipes available. Have a blessed day :)

Kale chips are super easy to make. Give them a try and let us know how it goes. Lisa

I have a pretty high-powered dehydrator, and I love it. I do have some challenges with things like fragile veggies. I did kale with a little garlic-infused olive oil, Bragg's and some nutritional yeast flakes. I just sampled one, after about 2 hours at 120F, and the taste is wonderful, but they will need more time. maybe even 6 hours to be crispy. Are they supposed to be crispy??

Food for thought: While working at the Tree of Life Cafe (a raw food establishment) we prepared our food with Love. LOVE, you say, ...YES! As everything is connected energetically, our attitude does have an effect. If you find yourself stressed, anxiety filled, conflicted, argumentative or just plain angry, may I suggest you step away, take a pause and deep breathe. Return to preparing your Kale when you are once again at peace. All will benefit, including YOU! ...and the Kale will be even more delicious.

Basic rule of thumb is 135degrees for 3-4 hours if not drying to maintain raw food value. For raw value, 115degrees for 4-5 hours, longer if your unit is not a professionl one. Some say 115 over night for home type models. Very easy to do. Just load it up n forget about it for at least 3 hours. Always check at the 3 hour mark in case you have power surges like we often do. If you dehydrate kale for too long, it will become extremely fragile and crumbles instead of being beautiful, luscious chips.

Typically a bunch of kale has 7 stems. A large bunch of kale has 12. I own an organic produce company and this is how we sell our kale. Hope this helps, seeing a lot of questions regarding bunch sizes. Also, I do not recommend using purple stemmed kale for dehydrating- too delicate n the chips break easily. Best is Siberian Curly Kale. Hearty, sweet, and nutty. Holds the sauces well, little breakage, and minimal shrinkage. Happy chip making! Oh, and for those who feel compelled to grouse because they cannot follow a recipe- do this on your own time! Thank!!

There are so many different types of kale. Can you give some info on the various types with regards to dehydration? Also would 2-4 hours at 115 be the temp and time for dehydrating kale without any seasonings? Looking forward to trying y9ur recipes. Thank you. Bookmarking this site. :-)

Hi! I would love to know how long Kale can last after being dehydrated. I've always done it in the oven and I find if we don't eat it right away it becomes kind of soggy. Is it the case with the dehydrated kale? Can you put it away for some time if you have left over? Thanks a lot!

How long can 'dried foods' useful life be expected to last. Dry - n - Vacuum, just dry and sealed, etc,? Any reference I can use to determine the 'shelf life' ? I'm thinking about electricity not being available, etc. Your thoughts will be GREATLY APPRECIATED. 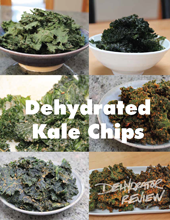 This one of the more flavorful kale chip...

Dehydrated plumbs are really good. Unlike the...

An interesting kale chips recipe that is sweet...

Kiwi is an interesting addition to almost any...

This is a nice leather to make when you're...

Kale Chips with garlic and cashews

A quick kale chips recipe that will satisfy...

Kiwi chips are a chewy, tangy treat with a...